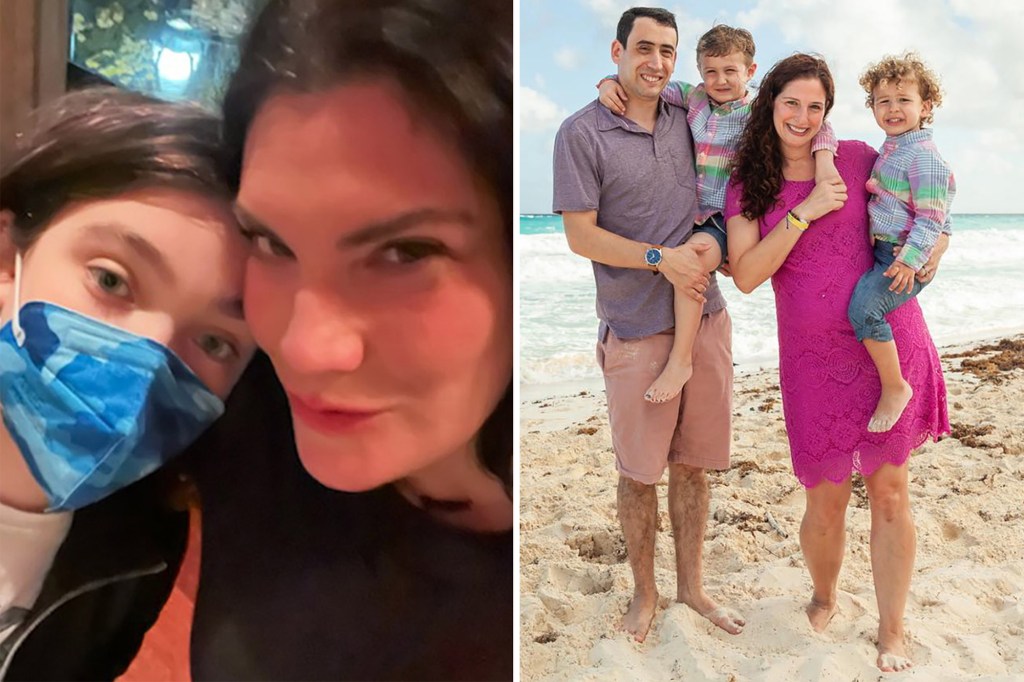 Two years after the start of the pandemic, New York is besieged by a new wave of COVID-19, thanks to its most infectious strain to date. And with schools reopening after the holidays – and vaccines available to all children over 5 – parents are at odds over how to deal with the latest wave. For some, a double or triple vaxx cleaning, in addition to a generally milder variant, is enough to convince them that gatherings, games, and air travel are worth the risk.

But for others, the new spike has left them vulnerable again – and angry with families who are outside, potentially bringing Omicron back into the classroom.

“We can’t stop living our life”

â€œI don’t care what people think,â€ said Lee Klein, a mother of two from Long Island who took her family to Disney World in Florida during winter vacation.

“If people are so concerned about someone who has traveled back to school, then why do my children wear masks every day for as long as they have, and why are they sitting in 3 feet apart and not allowed to play together indoors? I thought the masks were meant to protect. You can’t have it both ways – pick one side, â€Klein said.

Klein said she took precautions before taking the plane with her husband and their 5 and 7-year-old children, even canceling her daughter’s fifth birthday party to avoid a large gathering before the holidays.

She said it was worth taking advantage of the 80-degree days in December and the children were healthy when they returned to school on Monday. If anyone judged her for traveling, he mostly kept it to himself, she said. “I feel like I have a lot more, ‘I’m so jealous that you got out of here’ comments.”

Not everyone was so lucky.

Jennifer Minsky left for Cancun with her family over the holidays, having previously been forced to cancel the trip twice during the pandemic. Her two children, aged 2 and 5, have special needs, and the mother from West Orange, NJ, told The Post the family needed a getaway for their “sanity.”

But when they returned, the shame began. When she posted on Facebook about their bad experience coming back from Mexico, the judgmental comments came in: ‘”said Minsky. (She, her husband and eldest son are all vaccinated.)

She said now that they’re back, people are even skipping her youngest son’s next birthday party, despite his family being COVID-free. “We are very careful as much as possible, but we cannot stop living our life.”

“There is a lot of resentment”

Experts say that in the absence of a distance learning option in public schools and more specific behavioral guidelines, this type of COVID-related deadlock has become de facto citywide.

Manhattan Private Schools Advisors founder Amanda Uhry told The Post that â€œeveryone is suspicious of everyone in everything. There is 100% shame. This is especially true for those who have taken the risk of traveling to far flung places – “Iceland, Holy Cross, the Caymans” – while other families virtually lock themselves down as if it was March 2020.

â€œThere is a lot of resentment,â€ Uhry said, and it carries over to the kids. â€œIt breaks friendships and it’s not good for classrooms – some kids can play, some can’t. If a kid went skiing in Europe [during] Christmas, would you let your child play with him? It’s a mess.”

She said some parents, terrified of COVID, “are panicking – they don’t want to send their children back to school.” Indeed, New York’s public schools face massive teacher and student absences, with 33% of lessons missing on Monday and 28% on Tuesday.

Manhattan mom Lisa Maltz chose to send her only child to college on day one, but it was heartbreaking.

After dropping off her vaccinated son at his private school, Maltz said she “threw up [her] guts â€, when he learned that six children in his class were sick. In an effort to stay healthy, she canceled their planned trip to Florida while on vacation, only to find that “everyone traveled.”

â€œI spent two years avoiding this thing,â€ said Maltz, who founded the website Have a nanny need a nanny. “I know he’s going to have it this week.”

A Long Island-based mother-of-three, who declined to give her name for privacy concerns, was so worried that her vaccinated children would pick up COVID from their jet-set classmates that she kept them at home from school the first two days of this week.

â€œWe were very careful during the break,â€ she said. “I was sick after watching Facebook and all the New Years parties and people talking about how hard their hang-gliding life was in the Dominican Republic – while we were sitting here.”

She said moms in her community were “teasing each other and sharing screenshots” of posts from their freewheeling friends and neighbors.

â€œSocial media is the real storyteller,â€ she said. â€œEveryone says they are careful. Nobody says, ‘I’m the a-hole and the super-spreader.’ ”