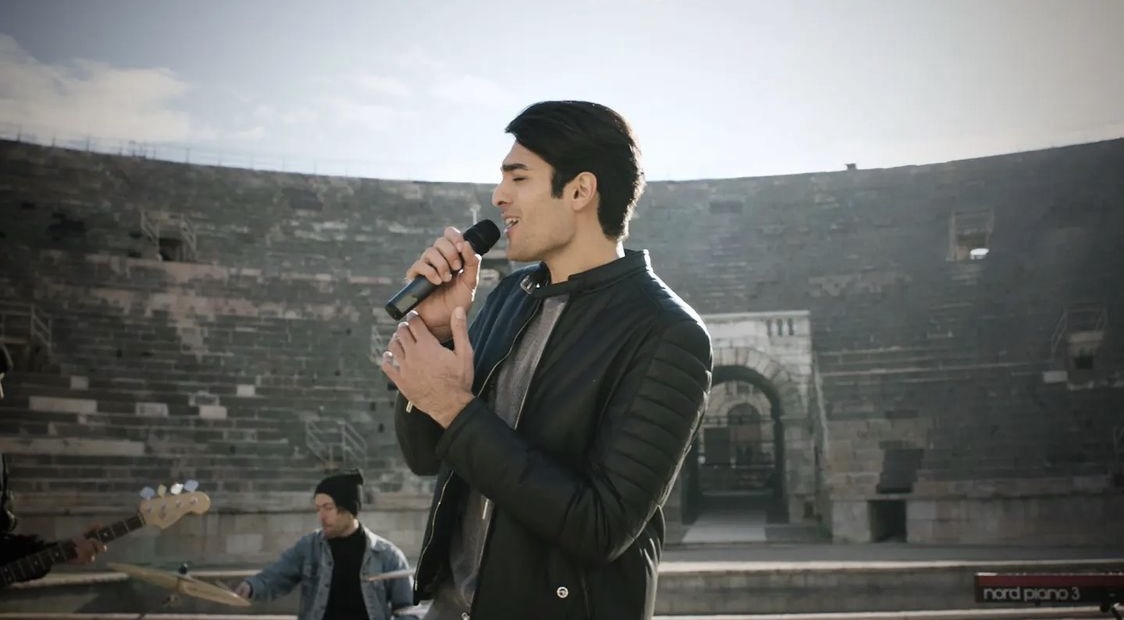 Whether you need an uplifting spirit or just love easy tunes from Matter Bocelli’s rich voice, you’re undoubtedly in luck as the acclaimed singer and songwriter kicks off 2022 with a brand new single and a video for “Close”. With its moving melodies, Matteo’s soul shines in the anthem, proving that his artistry is as charming as he is.

In a breathtaking visual that was shot at the Arena of Verona in Italy, Bocelli’s track soars through the space of the barren Roman amphitheater that once housed the talents of Paul McCartney and One Direction. Filled with feel-good energy and positive feelings, “Close” carries with it the sweet qualities that create timeless hits – play whenever you need a boost, on a road trip with your best friends, or have an outdoor dinner with your family.

As the new track was released, we sat down with Matteo Bocelli to discuss his influences, as well as the stories from his past that made him the man he is today. Head below for the full interview…

What has the pandemic changed in your life for the better?
It definitely brought my family closer. We have always been close, but so many months all together never happened and for that I feel very grateful.
I also had time to focus on my music with less pressure and that was very important in finding my own way.

Where do you live today? How does this influence your art?
Tuscany. Always. This is where I grew up and where my family still lives. I think there might be a misconception about me that my life is very jet set and cosmopolitan, and it can be sometimes, but I’m not a big city fan. The countryside is my real place. You can already hear it in the music I’ve released so far. In Solo, I wrote about being surrounded by the pitfalls of success but wanting to be home with the people I love.

Which artists were your biggest inspiration growing up? And today’s artists too? At 6 you started to learn piano and singing, did you like it right away? What were your favorites to play and sing?
The house was always full of music – not just opera and classical music, but also Sinatra, Queen, The Beatles. So I was brought up with very eclectic tastes and even now I feel a bit old when it comes to music. I loved playing Imagine by John Lennon, The Commodores, Elton John. Many of them are still my favorite songs now. The singers I really admire and respect now are the ones who managed to build lasting careers. People like Ed Sheeran and Adele. Their fans grew up with them and still love the work they do.

Obviously your father is an icon, what did you learn from your father, and also beyond music?
It was the work ethic that he instilled in me more than anything else. When I was a kid, I saw him working so hard for us as a family – traveling all the time. I found it hard seeing him go on tours and shows so often but I knew it was for us and it was hard for him too. And now I feel it myself, going out into the world as an artist. He taught me a lot of discipline. If you want something, you have to work for it, you have to train. It’s not just going to come out of nowhere.

Your first performance in the United States was with David Foster, what did you remember the most?
David was absolutely crucial in the development of my father’s career. If there were no David Foster, there would certainly be no Matteo Bocelli! David was the first person who told me that I belonged on the scene. Before David, I didn’t even think singing would be a career option for me – I just knew I loved music and wanted to be in it. David is the person who said to me, ‘you have the technical ability to do this, you have the skills, go ahead and do it’. What David took away the most from me is that there will never be a second first impression. It’s always important to give every performance everything you have because everyone is watching and you will be judged accordingly.

When did you know that music would be your career?
I knew quite young that music was my place. It wasn’t until later that I knew I wanted to pursue a singing career – as I said, David Foster really helped push me into singing. When I was younger, I was very determined to study music, go to a conservatory and get a good classical education. My father was never insistent on music. He didn’t expect any of us to follow in his footsteps. Once we released Fall On Me, and the response was so amazing – labels suddenly became interested in me as a soloist – that’s when I felt the music became more than ‘a passion.

What advice do you have for budding musicians?
Trust your instincts. And know that music is a language and it is important to learn it consistently.

What is the best advice you have received?
In life, it is important to do what we love but above all to learn to love what we do.

What has been the hardest part of your musical journey so far?
The hardest part is making yourself so vulnerable to the world. You write the music and it’s really personal, then you release it and wait for everyone to judge it!
I think nervousness is important. If you’re not nervous, it probably doesn’t mean much to you.

What has been your favorite part of your career so far?
There have already been so many amazing moments. My dad opened amazing doors – performing at the White House, playing Madison Square Garden and the Hollywood Bowl. But I think the biggest highlight is when I was sent the final artwork for Solo – my own single. There was an incredible sense of excitement and accomplishment that I had done this thing and it was actually real.

You modeled alongside Jennifer Lopez, what made you decide to do this campaign? What was it like working with her?
It was crazy ! I couldn’t believe they even wanted me to model with Jennifer Lopez! It wasn’t really a decision – when Guess says they want you to be in their campaign with one of the biggest stars in the world, you just say yes!
It was really fantastic to work with Jennifer – very fun and a great person in every way. He’s someone I really admire in the entertainment industry. She’s built an incredible and diverse career and she’s as relevant today as she was twenty years ago. He is someone to really admire.

How does fashion fit into your life? Which creators do you prefer?
It’s an interesting question because day to day I’m a very laid back person. I love my sports clothes and my sneakers. I used to be called “unicolor” because I never wanted to spend too much time thinking about what to wear, so jeans and a white t-shirt have always been my go-to look. I wear what is comfortable. But I like to dress up for a photo shoot. I love the opportunity this career has given me to try out different designers, different looks that I never imagined would work. The stylist says “try it on” and you can be really surprised when something looks awesome.

Your latest single has just been released, share with us how it came about?
This song was written between Lajatico and Los Angeles with Stuart Crichton and Wrabel. I had worked with Stuart before on other tracks, and Wrabel was someone I really wanted to work with. It came quite late in the process of writing the album. We had already decided that Solo would be the first single and when I came out of the writing sessions for Close, everyone immediately felt that it was the perfect follow-up track. Songs are two sides of the same coin. They both explore very similar feelings in entirely different ways.

What does 2022 look like to you?
Busy! I have performances with my dad and a lot of my own solo projects coming up. Lots of things I’m not allowed to say too much about right now. And more music too!

What is your ideal/perfect day?
I’m definitely happier outside in Tuscany. I like to make the most of the morning, so I’d be under the hood of an old Land Rover or fixing some other piece of machinery – I learned that from my grandfather. If I wasn’t a singer, I would have been a mechanic! Then a very good lunch outside with lots of fresh produce, then in the afternoon a hike with friends through the countryside or up to the coast.