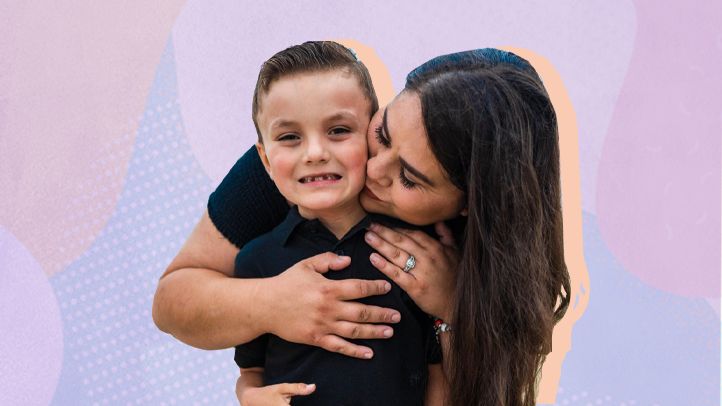 Severe eczema is no match for this mother’s love (video)

Payton was diagnosed with eczema when he was 4 months old, but he started showing signs when he was born. At first, Roche and her husband were able to manage it with lifestyle approaches, such as switching to unscented soap, lotion and laundry detergent; change Roche’s diet while breastfeeding; and, later, modifying Payton’s diet to avoid food triggers and potential allergens.

By the time Payton was a toddler, his eczema became severe. “It was pretty much head to toe,” Roche describes. “It was on his scalp and down to the folds of his toes.”

They tried various topical medications, but nothing helped control the open lesions in Payton’s eczema.

For school-aged Payton, that meant taking extra precautions. Roche wrapped her skin in gauze to contain the oozing and bleeding and prevent infection. She stuck cotton gardening gloves on her hands to keep her from scratching. Roche remembers regularly picking up Payton at school because his eczema was so severe.

As Roche describes, this affected Payton’s ability to have a normal childhood. “Sleepovers, going swimming, playing in the dirt – just normal things the kids do, he couldn’t do,” she said, “because that meant he would probably get an infection, and that didn’t just wasn’t worth it. “

Sleepovers, swimming, playing in the dirt – just normal things kids do, he couldn’t do.

She also began to see signs of emotional stress in him, such as anxiety and depression. “For a very long time he was like, ‘Why is God doing this to me? Why Did God Give Me Eczema? I can’t take it anymore.

Roche took Payton to a counselor and enrolled him in a resilience program. She taught him to focus on his good qualities and how strong he has been throughout his journey. She made it a point to do fun activities together. “I tried to do everything to help his sanity, because it was really difficult,” she says.

“I was so overwhelmed”: The impact of eczema on the parent

A parent never wants to see their child struggle – and Roche was doing everything she could to help him. ” I did not sleep. I was exhausted. I was so stressed, ”she says.

To top it off, Roche sailed on his own. Her husband is in the US Navy, and when he was deployed, “It was 100% just for me,” she says. “We have had so many doctor’s appointments. I was so overwhelmed. I couldn’t have a job, because I couldn’t leave Payton [with anyone else]. “

The weight of it all and the powerlessness to watch his oldest son struggle has become so significant that Roche says his own anxiety and depression have worsened. “I felt constantly, every day, like I couldn’t do this anymore.”

When Roche and her husband decided to attend their first National Eczema Association show with Payton, their main goal was to give their oldest son the chance to meet other children his age with eczema for the help to feel less alone. For the first time, the three of them connected with other families who understood what they were going through.