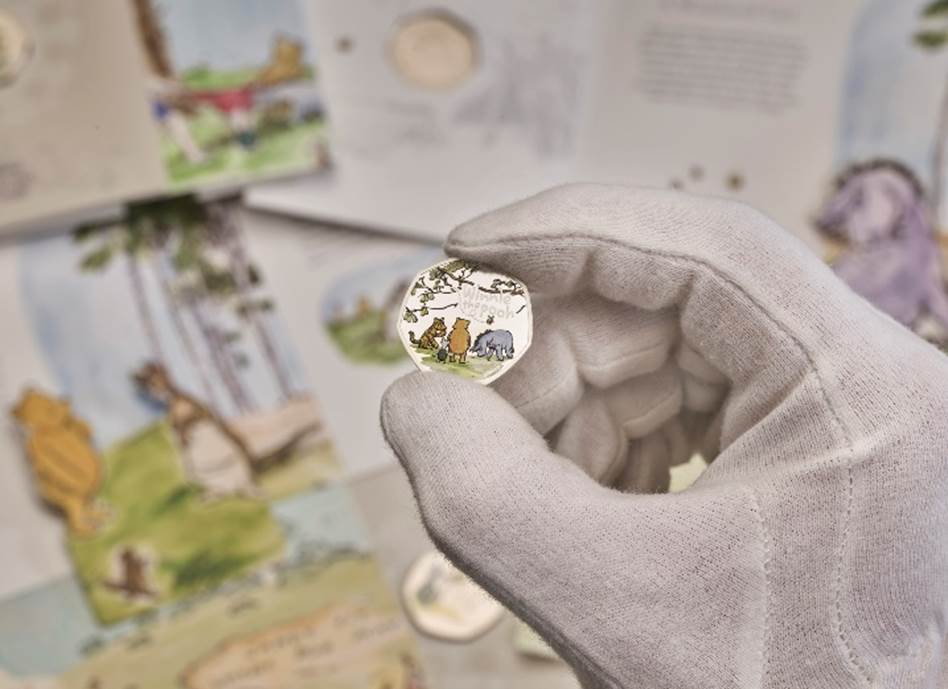 The Royal Mint has completed its popular Disney-inspired Winnie the Pooh and Friends coin collection with the launch of a 50p collector coin featuring Pooh and some of his closest friends.

The final coin in the treasured nine-coin collection, the new 50p features a woodland scene with the adorable bear and his friends from Hundred Acre Wood Tiger, Eeyore and Piglet. The design is inspired by original illustrations by EH Shepard and has been produced using British craftsmanship and the Royal Mint’s innovative color printing technology.

Royal Mint designer Daniel Thorne worked with Shepard’s timeless illustrations for the collection, which also sees Winnie the Pooh, Owl, Tigger, Christopher Robin, Piglet, Eeyore and Kanga and Roo miniaturized on the reverse (front) of the room. Adding a quirky touch, Thorne has included a signature bee motif to the classic designs, uniting each of the pieces in the Winnie the Pooh and Friends collection.

Collectors can purchase the new 50p design individually and as part of the Winnie the Pooh & Friends collection in gold, silver, base metal and special edition color starting today at the company’s website. Royal Mint.

Royal Mint Collector Services Director Rebecca Morgan said: ‘Coin collecting is a popular pastime, and the Winnie the Pooh and Friends 50p collection is one that unites generations of coin collectors. to share their pleasure. Based on original artwork by EH Shepard, the designs evoke childhood memories for people of all ages, and we are absolutely thrilled with the final design which combines Pooh and his pals as they embark on their latest adventure on an official coin of the United Kingdom.

Royal Mint designer Daniel Thorne said: “Working on the Disney Winnie the Pooh and Friends collection has been a fantastic experience, both as a designer and as a Winnie the Pooh fan. With each design, I’ve had to devote so much care and attention to remastering EH Shepard’s iconic illustrations for a coin’s canvas, while staying true to the text people know and love. As I reflect on the collection, I really hope collectors appreciate the beauty of each design and appreciate the special color editions that really bring classic tales to life. While I will miss working on this collection, as a coin collector, I am thrilled to get my hands on the final coin in the series, which is my favorite 50p so far!”