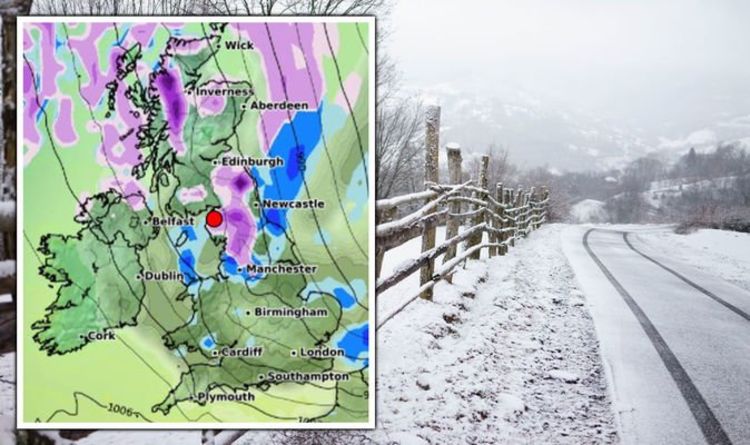 The UK will likely experience very variable weather over the next month, starting with warmer weather next week before turning much colder from January 5, according to meteorologist Jim Dale. At this point, he said, the UK can expect “a blast from the north”.

The weather forecast platform WXCharts shows parts of the UK being affected by around 2 inches of snowfall per hour on January 6, with the area between Manchester and Edinburgh mostly affected.

Speaking to Express.co.uk, Mr Dale said: ‘Then we expect a slight explosion from the north, an area of â€‹â€‹low pressure.

“It changes the whole airflow and we get a puff of polar air, for a few days, and the potential for snow, even before that kind of ebb slowly diminishes as we head towards the mountains. following days. “

But before the UK was hit by the cold, Mr Dale, senior meteorologist at British Weather Services, said the UK could experience what looks like ‘t-shirt weather’, amidst “exceptionally” warm temperatures.

He said: â€œThe next 20 days or so are very mixed, in terms of weather and temperature it will continue to move from one weather phase to another.

“By that I mean soft – very soft – in cold, even very cold with snow attached.

â€œAs we approach the new year, we will start to lose the snow that surrounds the hills today.

“It will start to recede later today and go away sometime tomorrow and certainly by Tuesday.

“It will fade as the New Year approaches until the 5th and 6th or so.”

Speaking of the varying weather expected to hit the UK, Mr Dale said we should be prepared to expect a range from ‘t-shirts to slides’.

He said: â€œAs you can see it’s a bit of everything.

“It’s t-shirts on the slides. That’s what it looks like.

“You’re going to see some unusual temperature spikes, then lows on the other side, in a few days.”

There is something about Lily Collins